Skip to content
How Does the EU IVDR Impact the IVD Industry? EU IVDR Key Changes

The date of application for the EU IVDR is quickly approaching. On the 26th of May 2017, the EU-MDR and EU-IVDR came into force. The MDR had a three-year transition period, which was extended by a year due to the COVID-19 pandemic. The EU-IVDR, on the other hand, was given a five-year transition period. We are now one year away from the date that the IVDR regulations will be fully implemented, which is the 26th of May 2022.

What does this mean for the IVD Industry? The IVDR replaces the IVD Directive 98/79/EC, bringing in drastic change to the regulatory requirements as compared to the IVD Directive. The IVDR is all set to bring in a multi-fold increase in the level of stringency, scrutiny, accountability, and responsibility which was not as apparent in the Directive. Most importantly, for the many devices that are being sold under the self-certified mode of CE marking, these devices will now be up classified under the IVDR, and manufacturers may not be able to place them on the European markets anymore unless certain conditions are met. This is potentially a huge business loss for manufacturers.

It is imperative for the IVD industry to understand the changes brought in by the new regulation. First, let us understand why the regulation brought in such a colossal change.

Why did the EU IVDR Change?

The IVD Directive was published and came into force in the late 90’s, more than 20 years ago. It was considered suitable for the devices available at that time. After the 90’s, there has been a massive change in the IVD Industry with many new innovative technologies being introduced in the market. These new technologies have led to the launch of varied types of devices, for instance, cancer testing, genetic testing, companion diagnostics, predictive testing, and many more. In other words, the IVD Directive became outdated and did not cater to these new products.

Another major reason for this change was that there were many disgraceful events that rocked the medical device industry. Of particular concern were the hip implant and breast implants scandals. The first issue was about wearing away of the metals chromium and cobalt from hip implants and entering the blood stream causing metal poisoning. This has had far reaching effects on those patients who received these implants. The second issue was related to the manufacturer using silicone oil in the breast implant manufacture which was not of medical grade. The breast implants started rupturing prematurely causing scarring and inflammatory reactions in the patients who received them. Both these cases affected large number of patients and this led to public outcry over the events.

The aim of manufacturers and regulators is to provide devices that are safe, effective, and do not cause harm to the patients or users. The safety issues that occurred negatively impacted the faith of the European people on the medical device industry, as well as on the regulations in place to protect patients. The need for change and a strengthening of the IVDD was strongly felt by industry, the regulators, and the end-users. At about the same time that the MDD was to being revised to the MDR, the IVDD was also sought to be revised to address all the concerns over safety and effectiveness of devices and to keep it aligned with the MDR, other global regulations, and novel technologies. 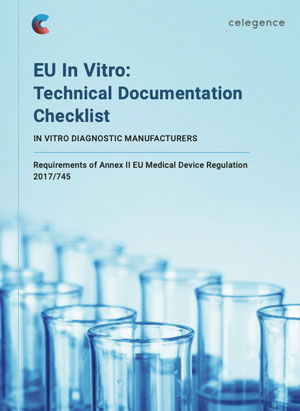 Key Changes Brought in by IVDR

Considering the tremendous complexity and changes brought in by the IVDR, there is a huge amount of work required to be done for compliance. It is time for the manufacturers to act now, conduct gap analyses, and upgrade their systems to comply with the EU IVDR. They also need to engage with their notified bodies as soon as possible given the fact that not many are available for certification. It’s time to act now.

Celegence experts can strategically guide you on how to go about your registration, device classification, performance evaluation reports, and support in country representation to make sure your company is fully prepared for the date of application for the EU IVDR. Reach out to us at info@celegence.com or contact us online

Dr. Anita Joshi is a Biotechnologist with 10 years of research and academic experience, including a Ph.D. (Biotechnology) from the National Institute of Virology (NIV), Pune, and Pune University. She also has 20+ years of BioPharma-Healthcare Industry experience in assignments with reputable commercial organizations. Anita has worked with more than 85 organizations since 2001 including: Span Diagnostics Ltd., Thermo Fisher Scientific, Merck Millipore, HCL technologies and more. She has been an auditor with BSI for ISO 13485, MDSAP, GMP etc. for the past 13 years. To date, Anita has 30 publications.

Table 1: In vitro diagnostic medical devices include any –reagent, reagent product, calibrator, control material, kit, instrument, apparatus, piece of equipment, software or system, whether used alone or in combination, intended by the manufacturer to be used in vitro for the examination of specimens. This includes blood and tissue donations, derived from the human body, solely or principally for the purpose of providing information on one or more of the following:

(a) concerning a physiological or pathological process or state;

(c) concerning the predisposition to a medical condition or a disease;

(d) to determine the safety and compatibility with potential recipients;

Specimen receptacles and accessories are also covered by the IVDR.

Table 2: Classification of devices under the IVDR